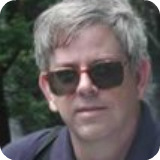 Bob Bradshaw hails from Florida, where he had the great pleasure of taking classes under novelist Wyatt Wyatt and poet David Posner. He defected from Florida decades ago and now lives in California. His poetry has been published in Eclectica, Apple Valley Review, Mississippi Review, Paumonok Review, Pedestal Magazine, Loch Raven Review, and many other publications [see here for his recent works]. He is currently working on a poetry manuscript titled Van Gogh in Love. Contact: bob@asiancha.com