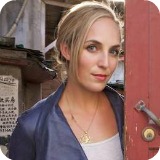 Although raised in New England, Kaitlin Solimine [website] has considered China a second home since 1996. Graduated from the MFA program in writing at UC-San Diego in 2011, she was previously a Harvard-Yenching scholar at Beijing University (2000) and a U.S. Department of State Fulbright Creative Arts Fellow in China (2006-2007) and she was the Donald E. Axinn Scholar in Fiction at the Bread Loaf Writers’ Conference (2010). She is also the 2012 recipient of the Dzanc Books/Disquiet International Literary Program award and is represented by William Clark Associates. Solimine wrote and edited Let’s Go: China (St. Martin’s Press) and blogs at Cold Mountain Collective.