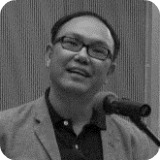 Eddie Tay is author of three collections of poetry, Remnants, A Lover’s Soliloquy, The Mental Life of Cities (winner of the 2012 Singapore Literature Prize) and Dreaming Cities (Math Paper Press, 2016) and an academic book, Colony, Nation and Globalisation: Not At Home with Singaporean and Malaysian Literature. He also runs the street photography blog Hong Kong Lucida and is an editor of the academic journal, Hong Kong Studies (Chinese University Press). Originally from Singapore, Tay is now an Associate Professor teaching courses on creative writing and poetry at the Department of English, Chinese University of Hong Kong. He became Cha‘s Reviews Editor in May 2009.

If you would like to submit a book (or books) for us to review, please contact Tay at eddie@asiancha.com. If you want to review a book for Cha, please also write to Tay for further information.

Read an interview with Tay here.